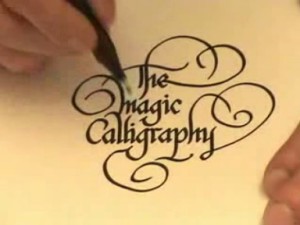 The story of writing is one of aesthetic evolution framed within the technical skills, transmission speed(s) and material limitations of a person, time and place (Diringer 1968: 441). A style of writing is described as a script, hand or alphabet.

Modern calligraphy ranges from functional hand-lettered inscriptions and designs to fine-art pieces where the abstract expression of the handwritten mark may or may not compromise the legibility of the letters (Mediavilla 1996). Classical calligraphy differs from typography and non-classical hand-lettering, though a calligrapher may create all of these; characters are historically disciplined yet fluid and spontaneous, at the moment of writing.

Some of the finest works of modern calligraphy are charters and letters patent issued by monarchs and officers of state in various countries.